Chinese Newcomers in Canada and the United States are a huge market opportunity for brands, but their unique digital media habits make them quite difficult to reach online.

At Eastward Media, we help advertisers reach Chinese Newcomers in the United States and Canada through their favorite Chinese websites and platforms.

We go beyond China’s Firewall to access display and video inventory on the largest Chinese advertising networks. Segmenting for digital users in North America, we can reach 99% of Chinese audiences who have lived in the United States and Canada for less than 5 years – an untapped and important market for brands.

How large is the Chinese ethnic audience in North America?

What makes the Chinese Newcomer audience so difficult to reach?

Chinese Newcomer audiences are difficult to reach because of their media habits. Let’s elaborate.
In the first few years when Chinese Newcomers are setting up their lives in the United States and Canada, we can observe two broad behaviors:

Chinese Newcomers have greater-than-average needs for a range of services and products. Banking, Automotive, Insurance, Real Estate and Education are some of the most important categories for this audience.

Chinese Newcomers retain their media habits from back home, preferring to use Chinese websites and social media over the mainstream North American equivalents. comScore’s Key Measures reports indicate that Newcomers in the United States and Canada can spend up to 85% of their total online time consuming content from China. For example, a Chinese Newcomer will under-index on YouTube but over-index on YouKu for video content. This media retention is largely driven by the desire to access Chinese-language content, which is unavailable elsewhere online.

The unique digital media habits of the Chinese Newcomer present a significant challenge for advertisers, since the places they most frequently visit online are disconnected from Google, Facebook and all other North American ad networks. 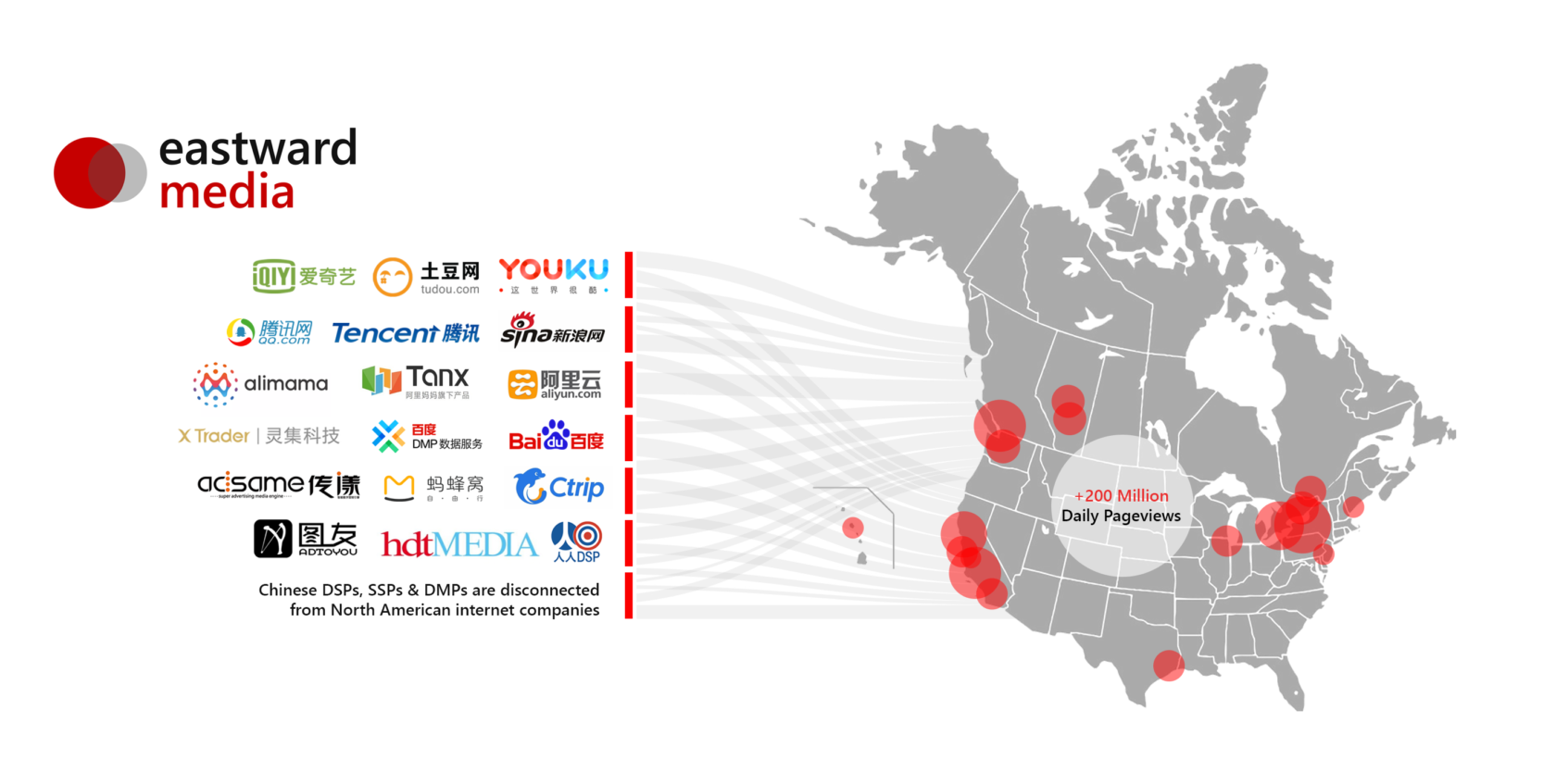 Why are North American DSPs unable to serve ads on Chinese websites?

The inability of North American DSPs to buy Chinese placements is not a technological issue, but a regulatory one.

China’s Great Firewall policy prevents non-Chinese internet companies from participating in their censored media landscape. This means that Google, Facebook, Adobe, Centro, Amazon, MediaMath, and the alike, are extremely limited in their access of media inventory or audience data offered by Chinese publishers. Access is one of three reasons why many media plans miss the Chinese Newcomer target.

Eastward Media offers a managed programmatic direct service for agencies and brands. Through our permissions from the Chinese Censor and partnerships with Chinese publishers, Eastward Media can access guaranteed impressions on 98.7% of all Chinese websites and video streaming platforms.

What are your targeting capabilities?

Through our managed programmatic direct service, Eastward Media can reach and engage segmented online audiences by the following attributes:

What are your reporting capabilities?

Advertisers who track campaigns through DoubleClick Campaign Manager are able to benefit from first-party log files that can be imported into in-house DMPs to enrich targeting, audience lists and subsequent digital campaigns.

What are Eastward Media’s programmatic solutions for media planners?

If you’re a media planner and are interested in learning more about Eastward Media’s digital solutions, we would love to connect with you for a 15-minute discussion. Schedule an appointment with a campaign specialist at info@eastwardmedia.com.