Online display advertising has come a long way since 1993, when the first banner ad was sold on Global Network Navigator, the internet’s first commercial website.

The Google Display Network – or the GDN – has been at the centre of display advertising innovation since 2003. Fast forward to the present, and almost all digital marketers will include Google Display as part of their top-funnel tactics.

But for all its advantages, there is a key limitation: the Google Display Network cannot effectively target Chinese audiences.

In an extremely general sense, the Google Display Network connects advertisers to publishers. Advertisers define their target audiences and the GDN pushes banner ads to appear on publisher properties – websites, applications and videos.

Google pays publishers for hosting network ads, and today, over two million websites are part of the Google Display Network.

But there are over one billion consumers that Google can’t reach – the Chinese.

Since 2012, the Chinese government has blocked all Google services. This means that Chinese publishers cannot be part of the Google Display Network, and thus, Google cannot serve ads on Chinese websites. Today, this block has extended beyond Google to include nearly all North American DSPs and ad exchanges.

What about Chinese consumer audiences in Canada and the United States?

Newly-landed Chinese populations in North America overwhelmingly retain their media habits from China. Language and content preferences drive this audience segment to use YouKu, instead of YouTube, Iqiyi instead of Netflix, WeChat instead of Facebook, and Baidu instead of Google.

According to a comScore survey by Eastward Media, Chinese audiences in Canada and the United States spend more than 75% of their total online time on Chinese websites that are not connected to the Google Display Network. 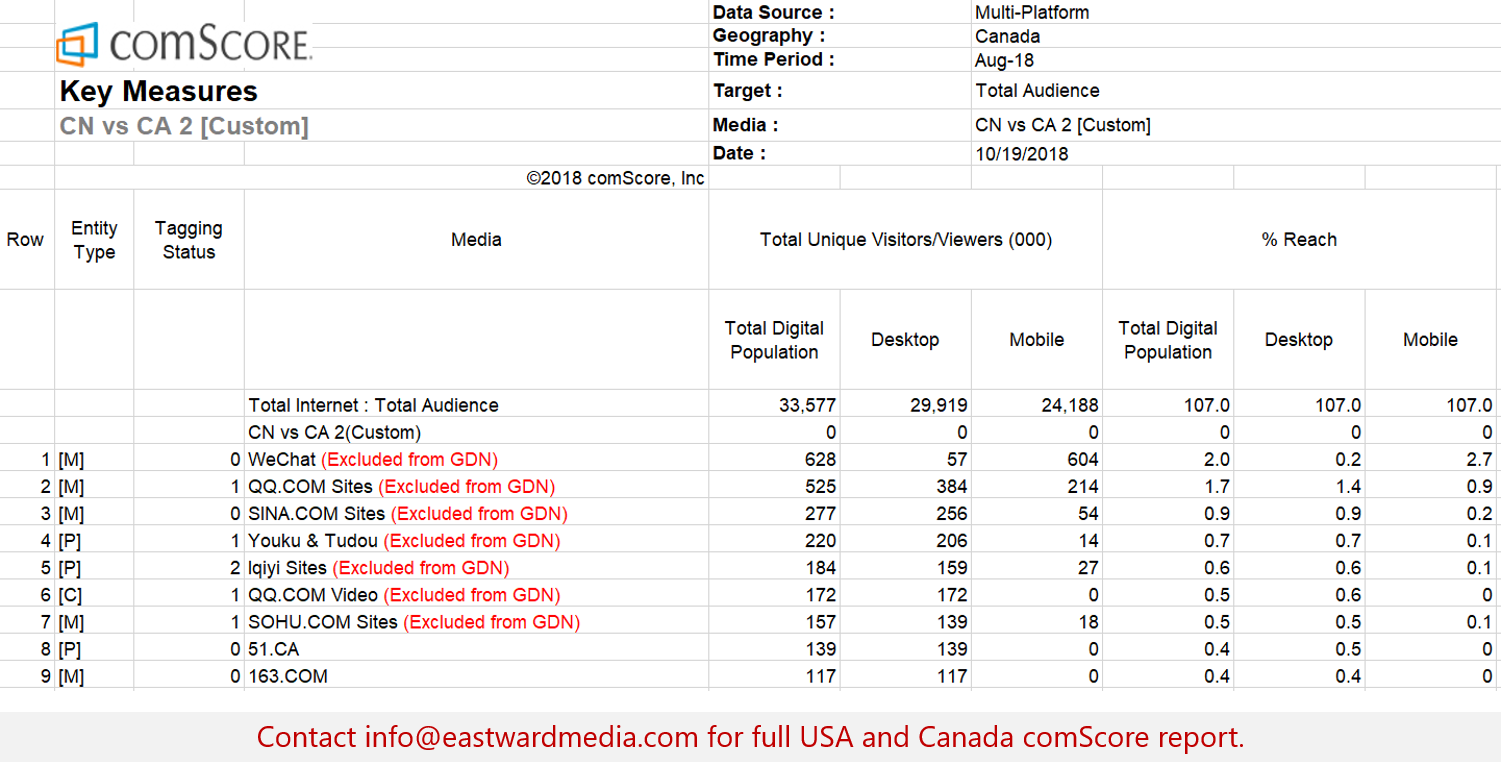 And even with the Google Display Network’s browser-language targeting feature, banner ads still cannot be served across the most popular Chinese websites and apps accessed by Chinese audiences in North America.

This presents a challenge for brand marketers and media planners who hope to target purchase-ready newcomers, and tourists who are forecasted to spend more than $1.5 billion annually in Canada, and $33 billion annually in the United States. An entire audience segment is missed.

How can my brand or agency target Chinese consumers through display?

Eastward Media has Chinese Programmatic DSP that can serve across 98.7% of all Chinese websites, and target consumer audiences by specific behaviors. Powered by machine learning technologies from Baidu, Alibaba and Tencent, we help brands and agencies penetrate the Chinese consumer market in North America.

Eastward Media is a digital agency helping North American brands reach Chinese audiences, worldwide. We operate as both a full-service media agency and as a white-label supplier for advertising agencies and digital consultancies.

Interested in learning more about Eastward Media and our programmatic guaranteed solutions to reach Chinese audiences across North America? Get in touch today.